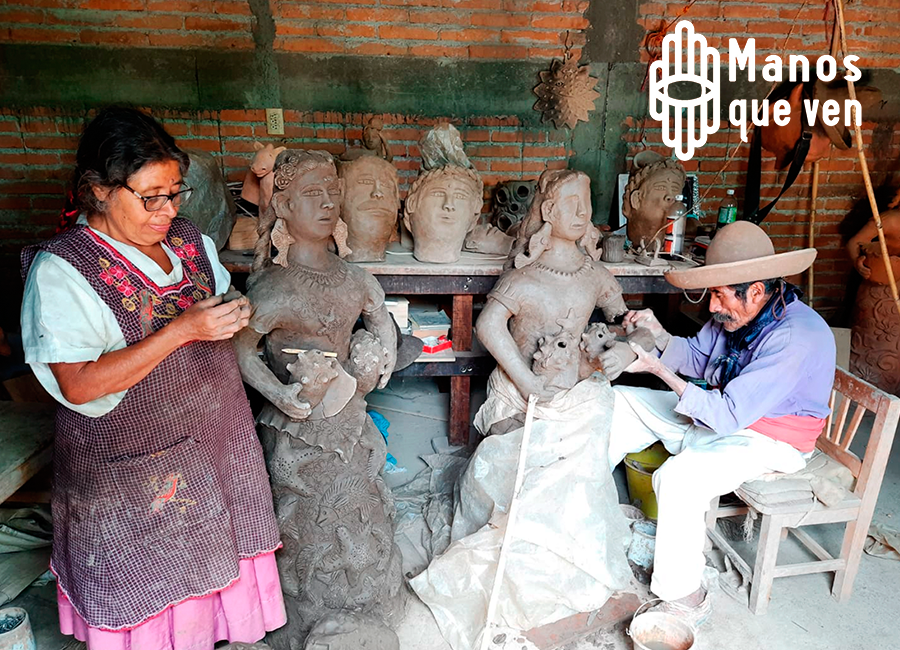 Literally translated, Manos que ven means hands that see. And that is literally the case in the workshop of the Maestro José García Antonio and his wife Maetra Teresita Mendoza Sánchez. Because since Don José lost his sight in 2003, it has been his experienced hands that he relies on when making statues and utensils from red clay. After José has formed the basic shapes from the clay, Teresita takes care of the further detailing and finishing. In this way, special artistic objects are created that stand out because of their originality, playfulness and magically realistic design language.

Ingelies Straatemeier, owner of Kitsch Kitchen, visited the studio in San Antonino Castillo Velasco and made a selection from their special ceramic collection, consisting of vases, flower pots and decorative objects, which is exhibited and sold in the Kitsch Kitchen store in April and May. The price range is from €65 to €350. The works have been exhibited in several museums in Mexico and art galleries in Los Angeles and New York. Kitsch Kitchen is proud to be able to launch Manos Que Ven in the Netherlands.

We celebrate this with a Fiesta Artesania, in other words a festive opening on Saturday 2 April from 16:00 – 19:00 at Haarlemmerdijk 48 in Amsterdam.

Meanwhile on the Gram

COLOUR YOUR LIFE! With our embroidered Sonara/ Tul

The Owusu chairs are back in stock! #kitschkitch

We are hiring. Are you the Customer Service Talent

Join Waitlist We will inform you when the product arrives in stock. Please leave your valid email address below.